The French have landed!

Another classic Anglo-French Napoleonic bash was on the cards, with a random terrain setup by Jim (as he didn't know the army compositions). An entirely accidental selection of some fine Tudor-style buildings and a coastline led us naturally to the only sensible scenario - Napoleon's Grande Invasion of England in 1804 has happened! The evil French are racing along the coast, with only a surprised Wellington (apparently teleported from India and and promoted on the spot) available to stop them! Can he save England from the horrors of good wine and pleasant motorway food? Victory would go to the side who could capture the enemy's village while retaining control of their own.

Throwing caution (and an all-too-acute awareness of my own tactical shortcomings) to the winds, for once I decided to play rather than umpire and built a French division to take on Ross's redcoats. We use a very simple army builder system, which produces division-strength forces, and I decided to make fully half my force veterans, with an infantry bias. However my single cavalry brigade was also good - two regiments of heavy cavalry (one of them Guard) and the regiment of Chasseurs á Cheval de la Garde. Ross on the other hand had spent points on above-average generals and large numbers of cavalry, many of them heavy regiments of dragoons.

My force lacked good generals (Ney was commanding the division with his customary élan and an AV of 3, but his brigade commanders all lacked ability) so it was clear even before I saw the battlefield that I would have to sacrifice a wide command focus and use Ney himself to push hard somewhere with my veterans in a very focused attack before the British could exploit our weaknesses.

Jim's terrain setup proved rather light on infantry-friendly terrain, and looked to favour Ross's cavalry and more flexible commanders - my troops would have to depend even more on their veteran abilities.

He had also placed a loop of river enclosing one of the inland corners, which although fordable would offer a useful defensive line if necessary.


Jim then joined the British, while Geoff arrived to assist with the French. Both sides schemed, and drew up a hidden deployment plan.

When all was revealed Ross had concentrated his division centrally, to ensure all brigades were in command and allow a flexible response to whatever the devious Frogs came up with. Said devious Frogs, on the other hand, had accepted that our limited command and control capabilities would require effectively splitting our force in two, with the two "reserve" (i.e. crap!) infantry brigades being left to their own initiative to hold on our left, while Ney led the two veteran infantry brigades and the cavalry in a sudden coup de main through the hills on the British left.

Initially, we deployed our poorer infantry brigades well forward and a veteran brigade more ambiguously in our centre, to try and fool the enemy as to our intentions. This was aided in Turn 1 by one of the poorer brigade commanders passing his initiative roll, against all odds, and his units promptly loaded up their full 2 IPs each; seeing that, the British immediately assumed his force were all veterans!

However, wining the initiative roll on Turn 1 made that ruse somewhat academic, as Ney was able to immediately send the Guard cavalry galloping straight towards the open road, his cheering infantry following.


Crucially, the strong British cavalry force was deployed centrally and on their right - there was nothing immediately available to counter the rapid French mounted envelopment on the left. However, brigades were quickly on the move towards their flank to meet the threat, while the redcoats formed square and prepared to make rude gestures at La Garde.

However, by the time Wellington's mounted reinforcements were arriving in Turn 2, French infantry which had rushed up the unguarded road in the wake of the cavalry were already appearing over the crest of the hills on the British left, and a horse artillery battery had also arrived to provide close fire support. Suddenly, the squares - and even the garrison in the village - began to feel nervous...

Some British cavalry made a valiant counter-attack to try and force the French off the hill, forcing infantry into square for a short time. However, this brave effort was broken by a sharp volley of canister from the French horse artillery who galloped over the crest. 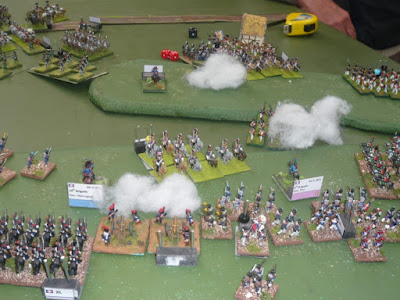 While all this was going on, a major British counter-attack developed in the centre and on their right, as Ross tried to isolate a couple of French veteran infantry battalions in and around the central enclosures, as well as push towards the poorer French brigades on the French left. However, the latter had followed their orders and, after their initial demonstration of enthusiasm, had fallen back to a deep defensive position at the rear. Ross's cavalry-heavy force was able to demonstrate against them, but he simply lacked enough infantry to also mount a combined-arms assault on that flank. Under Geoff's canny command, they refused to be drawn into any reckless action and as they realised the cavalry could do little against them alone were even able to start slowly pushing forward again.

In the centre however there was a rougher tussle, with the British Light brigade skirmishing with French troops and the Guards unleashing volleys against them, but ultimately again these were just too weak to force the enemy out of those enclosures. As Cuirassiers arrived to threaten them, they had no choice but to pull back.

Unfortunately in all the excitement I managed to forget about taking photos for a large part of the game, but will hopefully be able to update this later with some of Geoff's.

Eventually, French local superiority on the British left flank (especially in troop quality) had the desired effect. The two Guard cavalry regiments must again be singled out for a Mention in Dispatches - even the Chocolate Box Carabiniers (once they finally stirred into some action) broke unit after unit of enemy horsemen. Stripped of their cavalry support, the British squares on the hills faced the lethal barrage of French canister fire alone, with the inevitable consequences. 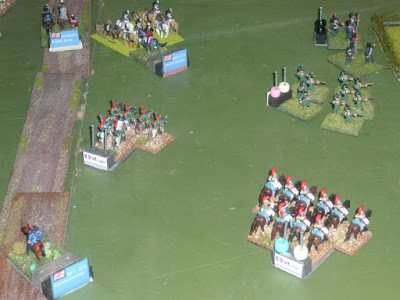 Although reduced to half strength, the Guard Chasseurs á Cheval continued to rampage through the British lines until Wellington's force was reduced to a stream of broken troops fleeing the field.

As ever, thanks to all the participants for a hugely enjoyable game (well, I would say that, I won!)

Without a doubt, the French veterans won the day. Sacrificing higher command ability (and thus effectively fighting with half an army) in favour of troop quality where it mattered proved - on this occasion - to be a winning strategy. It could easily have gone very wrong though, under different circumstances.

Specifically, we were able to take advantage of our good fortune in the British deployment, as their left flank (our intended focus for attack) was left without immediate cavalry support. We were surprised (especially given the amount of cavalry they had) that the British had not defended the road on their left, as it was an obvious route for a concealed attack. Our veterans were able to exploit this with the speed of their advance, from which the British never really recovered - those extra IPs really do matter in a situation like that.

Despite having at least a 2:1 advantage in cavalry, the British seemed unable to concentrate it effectively, responding with too little mounted force to the threat on their left and enabling the better-quality French to isolate and destroy units piecemeal. Also, although the British had the same amount of artillery as the French, it was all Horse and so significantly more mobile and flexible (only one French battery was Horse). However for some reason this flexibility was never apparent and its mobility was never demonstrated - French guns always seemed to be where they were needed, and caused much more damage than their British counterparts.

All in all, a very interesting, instructive and exciting game.