Action at the Guardiana Bridge.

This, the first action of the Armee du Nord in the current Peninsular War Campaign going on in Christchurch, was no light ordeal by fire for the men of General Junot's Corps. For the six weeks since the campaign opened in March 1810, le Duc d'Abrantes has been gathering in his troops for an advance into the desolate badlands of Estremadura - central Spain.

It had been a lonely march. Just once did the French glimpse the enemy, a troop of light horse, far to the south, on the far bank of the Guardiana River. In the second week of April, the main body of Junot's troops, now at the end of a slender line of communication, were approaching the stone bridge that represented the sole crossing along this road of that broad stream. Awaiting them upon the far bank lay a Spanish Brigade reinforced by a battery of light guns. 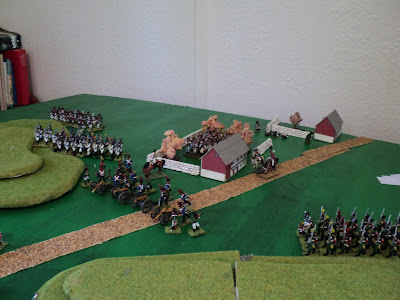 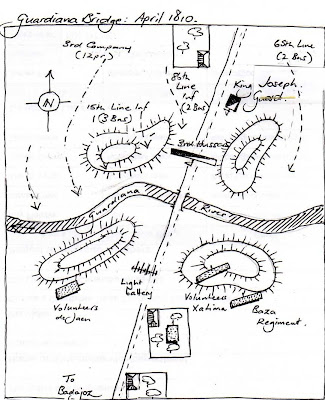 The veterans of 3rd Hussars led off in line to cover the deployment of the rest of the army. As they swept over the ridge to the west, the column of II/15th Line were greeted by a deadly salvo from half the Spanish battery firing at long range. 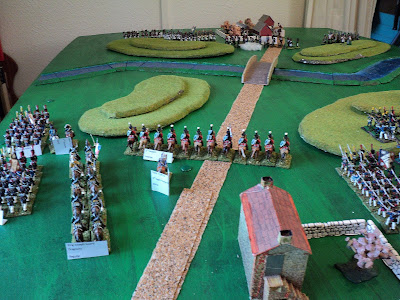 Discreetly, the battalion withdrew behind the crest to await developments. In the meantime, the laborious process of bringing up and deploying into line the big guns of 3rd Company went on. 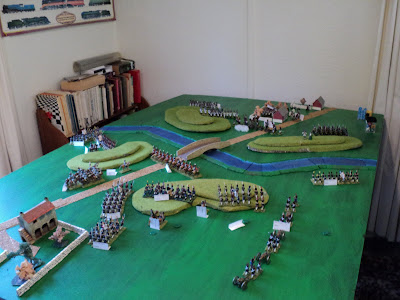 With the disappearance of the infantry, the Spanish guns turned their attention to the hussars fronting the bridge. On this day the Iberian artillerists were plying their pieces with a will and with skill. Within too short a space of time, the Hussars were reduced to half their original numbers, and betook themselves to the rear.

More in hope than expectation, Junot ordered his Cavalry commander, General Curto, to take the guns. Joining the King Joseph Guard, he flung the dragoons across the river, straight into the teeth of the deadly canister fire. The gunners stood with the aplomb of veterans against the sight of several hundred horsemen thundering down upon them.

Having lost 40% of their strength by the time the reached the gun line, the troopers were already wavering, but retained sufficient resolve to cut down several gunners. The latter responded with trailspike and rammer eking out their few pistols. 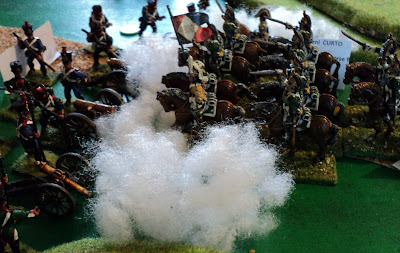 At last, the troopers fell back exhausted. Shaken by the losses thay had taken (60%), they fell back to the riverbank under the shelter of their own artillery on the north bank. 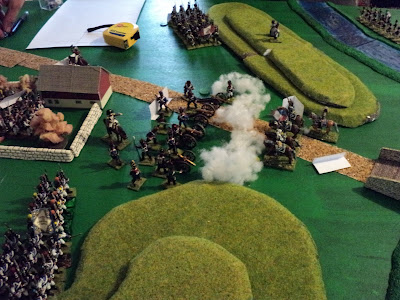 At least they had silenced a section of the guns, and put the rest of the battery out of action for a space, but the job was yet to do. It was up to the infantry. 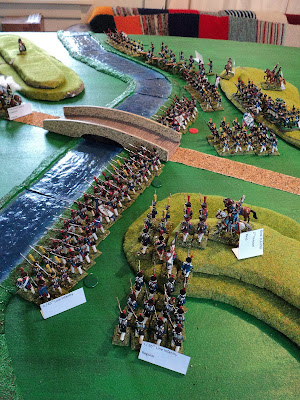 As the infantry lined the river bank, Junot had already been directing columns to ready themselves to attempt the crossing. The battalion immediately available turned out to be the 500 conscripts of II Battalion, 86th Line Infantry - not Junot's ideal tool for the task in hand. Nevertheless, any rearrangement would likely do more harm than good: across the bridge they went. Reaching the other side, they began to trundle forward towards the guns. 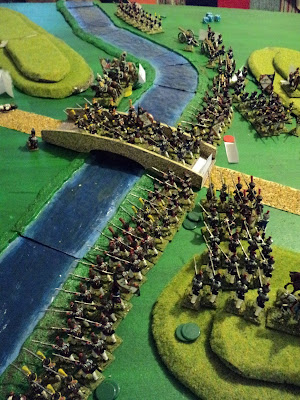 But the Spanish commander had seen it all coming - as who could not? - and had brought up a 700-strong column of Volunteers de Laen to intercept the attack. In a costly and tough close-quarter fight, Spanish numbers told, and although losing heavily themselves flung the enemy unceremoniously back whence they came. 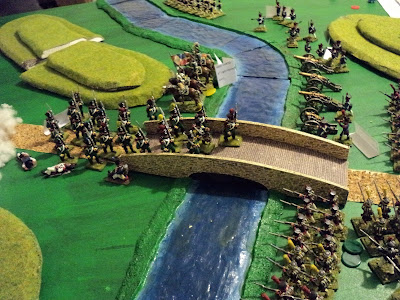 All would have been well and satisfactory so far as the Spanish commander was concerned had not the Volunteers de Jaen allowed the excitement of their victory overcome their fear of the enemy. Though easily distanced by the scampering Frenchmen, the Volunteers reached the middle of the bridge where they were met by a devastating volley of canister, and II/65th coming the other way.

Under cover of the cavalry and infantry assaults, Junot had brought his guns much closer to the bridge, ready to crush the lighter Spanish ordnance beneath the weight of his counterbattery fire. There they were, in good time to provide for the Volunteers de Jaen a lively exposition of French gunnery at short range. 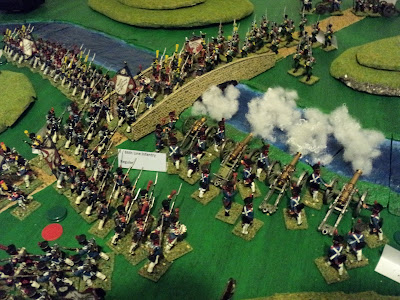 The lesson was well taught. Mowed down in windrows by canister, the disordered survivors were crushed by the French infantry onslaught as well. The scant survivors, 100 out of the original 700, fled the field. 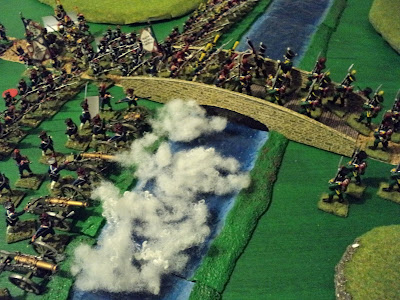 There was little now to stop the French crossing. The artillery had drawn back a piece, and their shelling, though galling enough, was insufficient alone to slow the French down much. No infantry counterattack materialised, though Junot would probably have welcomed one. 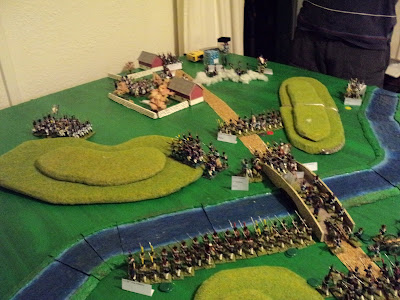 Instead, declining further action, the Spanish drew off. They had drawn blood, and had no wish to augment the French vengeance by further acts of rashness.

So Junot had his bridge, but at considerable cost. Early estimates put Spanish losses at somewhat short of 700; the French very close to 1000. But the crossing was secure, and Junot had not yet revealed his entire hand...

Posted by Archduke Piccolo at 12:39 PM No comments: