As Waterloo Day this year fell on a Saturday when we'd already proposed gaming, the subject was inevitable! Then we got another big quake (well, two actually), and so folk suddenly had other priorities. Despite all that Dave, Ross and Andrew defied the Fates and turned up variously through the day - so (with appropriate delusions of grandeur), the big table became a scaled-down Waterloo. Lacking players and time, we settled for organising the troops and deploying the Allies. Thanks to Dave for most of the photos used here.


The French army musters for battle: 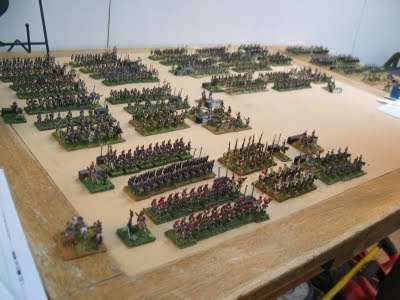 This photo shows the view from the Allied right rear, behind Hougoumont looking west along the length of the field: 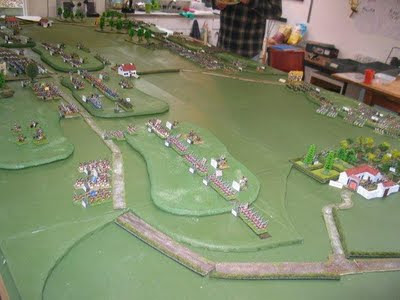 This gives a slightly more general view, also from the same end of the field: 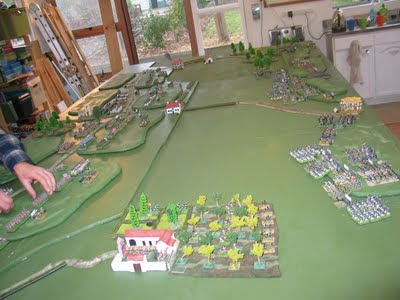 The French forces have been arranged rather randomly (and indeed half are off-table in Reserve), and await the hand of Napoleon!

A week late, the Gods of War, Fate and the Four Horsemen of the Apocolypse finally turn up to party. Andy, by arriving first, bagged the role of Napoleon, ably assisted by Geoff and Paul, while Dave and Barry commanded the Allies.

Finally bursting into action, Napoleon opens hostilities, scoring some early artilllery success against the Allied batteries exposed on the front slop of the ridge. 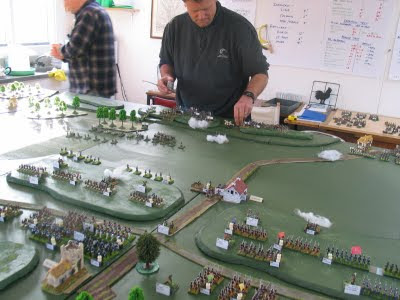 The French launch an initial attack by d'Erlon's Division against the Allied left-centre, to the east of La Haye Sainte. 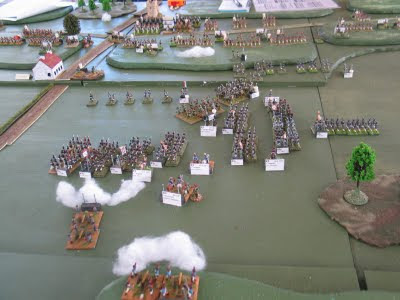 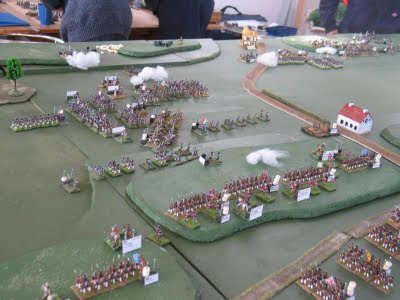 Meanwhile, on the French right flank, Napoleon ignores reports of a Prussian advance and orders Lobau to bring his entire Division onto the field against the British. This is a decision which is likely to have a profound effect on the outcome of the battle, one way or the other!

The French attack develops, with cavalry and light infantry moving up to cover the infantry brigades behind. Lancers have an early success against some shaken infantry. 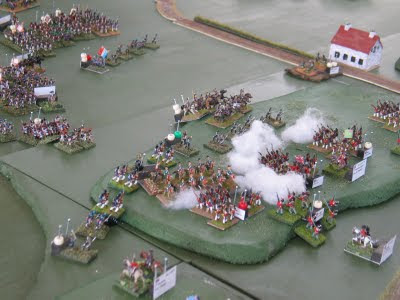 .
The allies respond with a decisive charge by the Scots Greys, who smash the dragoons threatening the Allied centre. 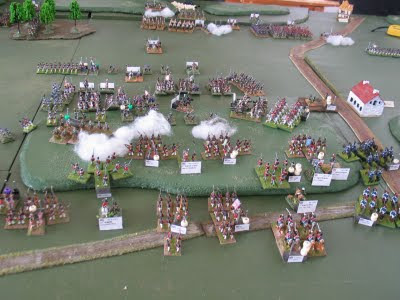 On the French right, Lobau boldy pushes his troops forward towards Papelotte and the La Haye. Rashly, his cavalry assume Papelotte is unoccupied, only to be shaken by a brisk eruption of musketry from the Brunswickers defending the farm. In some disorder from this surprise, the leading French units are stunned by the eruption of a Prussian cavalry brigade from the woods to the east, who charge without hesitation. 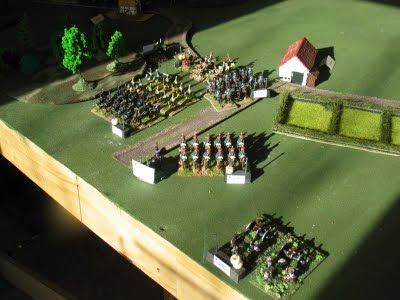 The French pour infantry onto the Allied squares as the lancers exploit their success. 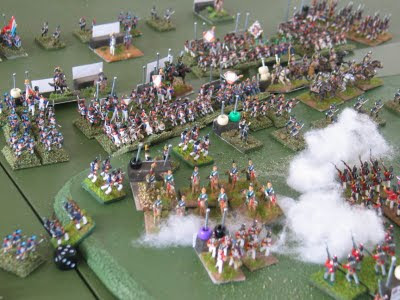 Meanwhile, on the French left, Reille's Division finally makes a move, with one brigade advancing towards Hougoumont while most push towards the Allied main line. 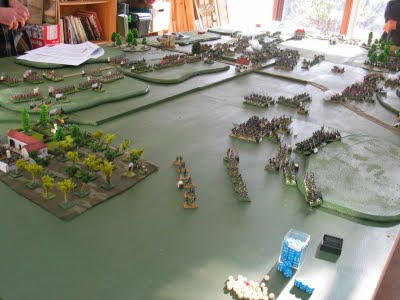 Napoleon's decision to pull Lobau's Division away from its role as a buffer against the Prussians is beginning to pay an unpleasant dividend. Unmolested, von Bulow's Division has pushed rapidly west through Placenoit, and its leading cavalry brigade has already appeared to threaten the French right rear. Meanwhile, von Zeiten's infantry now begin to arrive east of Papelotte and advance towards the French. Lobau is now engaged on two fronts. 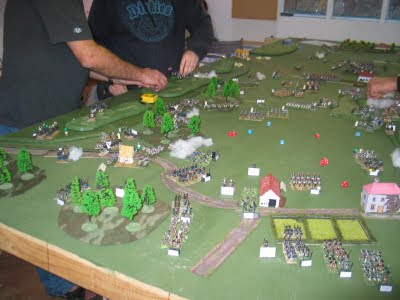 The desperate fight for the centre continues, with the French columns finally beginning to make some headway against the increasingly fragmented Allied line. Over to the right of La Haye Sainte, Reille's men advance towards the slope to the west while La Garde can be seen marching proudly and confidently forward in the centre. Clearly, Napoleon is determined to force the battle to a decisive conclusion here, as quickly as possible. 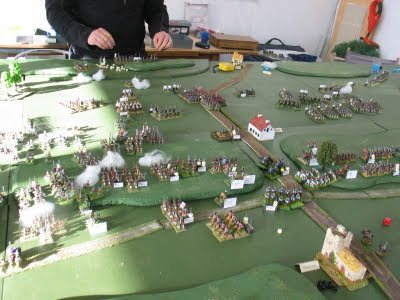 With the centre heavily contested, Napoleon has committed his reserve cavalry Division, along with the cavalry of the Guard, to repel the Prussian assault on his right flank. But as ever-more Prussians push west and south, is it too little, too late?

The British left finally collapses under enormous and sustained pressure. French artillery continues to pound La Haye Sainte, reducing the south side to rubble, and La Garde evicts the survivors of the garrison. Reille's men are now fully in action against the British right, preventing those units from reinforcing the centre.

More Prussian troops continue to flood onto the field and are thrown into action as they arrive, in a desperate effort to break through the French right in time to save the British from destruction. However, Lobau's men mount a heroic stand, preventing the  Prussians progressing through the woods far enough to influence the outcome of the action further west. Lobau's Division is all but destroyed, with brigades reduced to the remnants of battalions, but they have achieved what the Emperor asked of them.

It's all over bar the wailing and gnashing of teeth. The French have torn a gaping hole in the Allied centre, leaving the British no choice but retire on their LoC to the west and leaving Brussells open to a fate worse than death... First, of course, Napoleon will have to swing the bulk of his army to face the Prussians one last time tomorrow, but it is hard to see how they can stand against him, especially once Grouchy's Division finally shows up!