For some time now I've been experimenting with an alternative basing system for VLE. The motivation is entirely aesthetic - I've just never liked the look of infantry columns which the old bases make look excessively narrow and deep, and having Cavalry on a differently-sized base to Infantry skews combat a little.

The "old" basing was originally a compromise to accomodate the load of figs I had based for other rulesets. Infantry elements are deeper than wide (20mm x 30mm), and cavalry is a different width (30mm). When I started basing figures again from scratch, and rebasing a load of Russians I'd bought on eBay, I thought I'd use the opportunity to experiment.

The "new" style puts both Infantry and Cavalry on 25mm square bases. This widens and reduces the depth of infantry formations compared to the "old" bases : 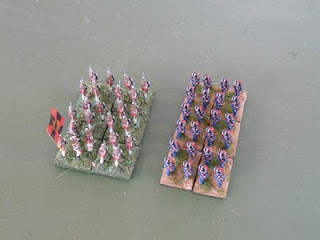 The only drawback I've met is that a lot of modern figures just don't fit into a 1" square if you want a 2 x 2, rank-and-file layout on the base. Instead, I slightly offset the front and rear ranks (something I've also seen commonly done with 28mm figures on 40mm bases, so they obviously suffer from the same problem!) 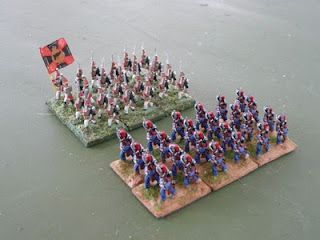 While I think it gives columns a much more satisfying "look and feel", it certainly stretches lines, which you might not like the look of : 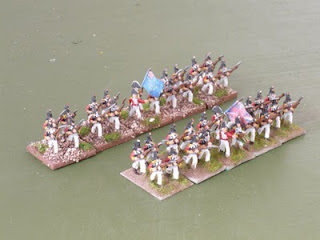 I also prefer the tighter spacing it gives to Cavalry : 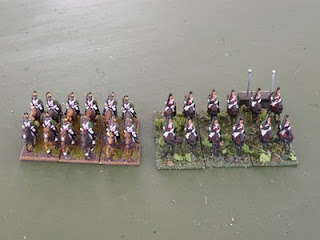 At the end of the day, it's a purely personal preference. Basing doesn't affect the rules, we just have to make adjustments if two differently-based units come up against each other, but you might like to compare them yourself and decide which you prefer before basing too many figures. Over time, I expect I'll rebase most of my troops to the 25mm square style.


With my usual inconsistency, I've left Artillery on 40mm x 40mm bases simply because that seems to work, and looks good! What I have done with my more recently-based models is to separate the crew onto a 40mm x 30mm base of their own, which sits behind the base containing the gun. This lets us easily show abandoned guns or score losses off crews and guns separately, as well as requiring far fewer gun models to repersent artillery from different nations - all you need  do is swap the crew to turn a Prussian gun into a Spanish one...