Following the disaster at Vittoria, French troops in the north of Spain are in full retreat towards the Pyrenees. Longa is snapping at Foy’s heels, and Graham (never the sharpest tack in the box) is trying to find Maucune’s supply column as it comes south from Bayonne. Unfortunately the French aren’t co-operating with allied plans, and unknown to Graham Maucune turned his supply wagons around at Tolosa and has moved his division to Villafranca to cover Foy’s withdrawal.

So as Graham finally finds his way out of the hills to the south, Foy’s men are moving across Maucune’s rear along the road from Villareal to Tolosa towards safety in the Pyrenees. The British objective was to move onto the French rear, cut the road in Row A and hold it for at least three full Turns. The French objective – obviously – was to stop them!

I should point out that this was not meant to be the real Battle of Villafranca – although the historical setting is accurate, the terrain and scenario details are almost entirely fictional. Those familiar with C.S. Grant’s Tabletop Teasers may recognize striking similarities with “Turning the Flank” – the river is generally impassable, but the British were aware it could probably be forded if they could find suitable locations. Villafranca itself was something of a fortress, to deter any but the foolhardy from a frontal assault.

Forces were broadly similar in size, but the French were somewhat worse in quality. However, the British were split - their advance guard started to arrive on Turn 1, but the bulk of their force was delayed; players did not know when they would appear. Ross commanded his British with Andrew's assistance as advance guard commander, while the French were represented by Geoff and Jim.

The French garrisoned Villafranca with a brigade supported by the divisional artillery, while two full infantry brigades and the cavalry brigade were deployed well forward beside the town and on the rear of the hill to the south-east. No reserve was held back - the entire area behind the river was defended by only a single infantry brigade positioned in the left rear, covering the road to Villareal. Clearly the French intended to be aggressive, and hoped to disrupt the British advance before it could get started - a strategy which left few options, and led to much debate after the game!

The next British turn though saw the welcome arrival of two light dragoon regiments with a second battery of horse artillery. This seemed to dispirit the French, and they effectively surrendered the initiative.

Maucune had a massive force facing the redcoats, but it was so condensed into such a small area the units were tripping over each other - the French cavalry spent the morning trotting forward and backwards but never seemed to be in a useful position. The smaller British force did an excellent job of containing Maucune's men while they waited for reinforcements.

Suddenly, there was consternation in the French rear. A brigade of Longa's Spaniards had marched towards the sound of the guns, and appeared on the French left.

Maucune was confident his men could hold back such a rabble though, and sent his Légère into the woods to see them off. From where they were promptly ejected by a determined brigade assault... 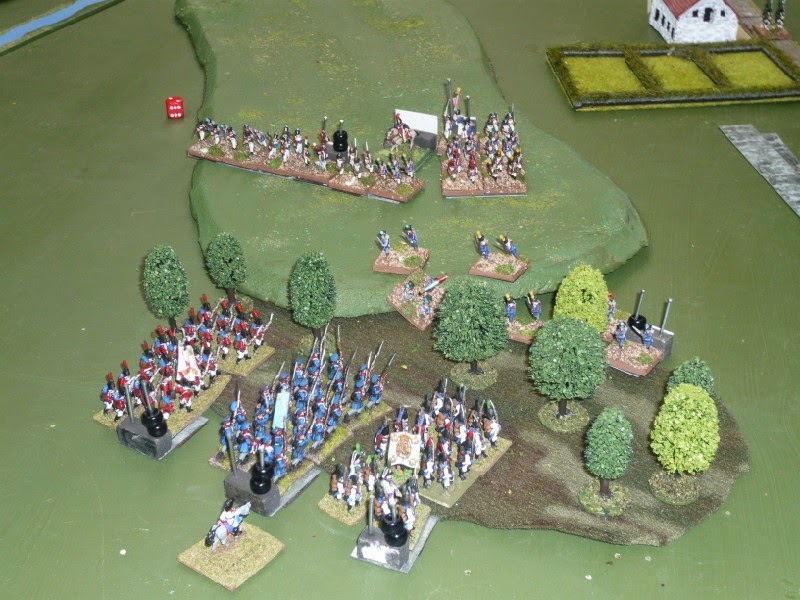 Both brigade commanders showed considerable initiative, and this small action grabbed everyone's attention as it began to dominate the battle. A desperate struggle developed, with columns charging and counter-charging amidst a storm of musketry. One Spanish regiment broke but quickly rallied, but the French were pushed back.

Finally, two French battalions broke and routed up the road, leaving the brave Légère to face the victorious Spaniards.It could only be minutes now before the vital road would be cut...

Meanwhile the British main force had started to arrive, and as the struggle in the distance developed, both sides began to pour forces over the river in a Race for the Road.

As the French tried to also pull an infantry brigade across the river though, disaster struck. Two and a half batteries of British artillery galloped up and unlimbered across the river, creating a perfect storm of canister which simply slaughtered the poor Frenchmen with 500 men falling in 15 minutes.

The British also maintained pressure on their left against the defenders in front of Villafranca throughout the day, finally finding some dry powder and discovering how to make their muskets work...

By mid-afternoon, it was clear the writing was on the wall for Maucune. His losses were mounting, and a Spanish brigade sat astride the road from Villareal. The French general faced up to defeat, and withdrew his shattered force back towards Tolosa. French losses were considerable at around 2000, while the allies suffered only a quarter of that.